I Don’t Know When to Shower 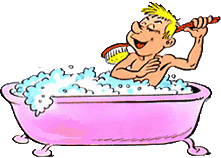 Two weeks ago, I had some reconstructive work done on my nose and the doctor doesn’t want me to work out again for another two weeks.  This is difficult for me for several reasons.

The first one is, working out is a part of my life.  I don’t really even feel alive if I don’t work out.  My muscles are used to regular activity to keep them flexible and now that they don’t have it, they’re tensing up, especially my back.  And I’m not outdoors as much.  I work out in a gym, but I also run and ride my bike, so I’m jonesin’ on the sun. Plus, I feel like a slug.  But all of this I anticipated.  I knew I wasn’t going to like it, but I knew it was coming.

There’s one thing I didn’t anticipate.  Not knowing when to shower.  See, I shower after working out.  Normal enough.  But with few exceptions, that’s the only time I shower.  And I don’t know what to do now.  The workout is the trigger for the shower and without that, it just doesn’t occur to me to do it.  There never seems reason to.

It may only be when my hair gets dirty that I’ll realize I haven’t showered for a couple of days.  Fortunately, it gets dirty pretty quickly.  (According to those in close proximity with me me, I do not have BO, so the smell hasn’t pushed anyone to suggest a hygiene adjustment)

But it’s just so strange to have to consciously think about this.  Isn’t it funny the things that don’t occur to us until they happen?