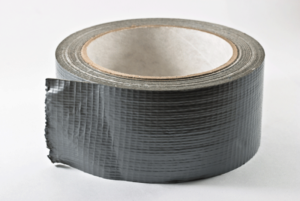 One of the apartments in my building was being re-carpeted, so I asked for a scrap. I wanted to use it as an inside mat. I don’t allow shoes in my apartment, so I have a seat and a mat so people can put their shoes back on with when they leave.

But one thing I had learned was how much the edges ravel, so I wanted to bind them. So, I went to a fabric store to see what I could come up with. I bought some blanket binding and some iron-on hem tape, then attached hem tape to the carpet and the blanket binding onto that. It was a little more difficult than I had anticipated because fabric does always lie straight, but it worked well enough. I proudly put the mat in place. As I looked at it, I thought … Wow.  That looks just like … duct tape.

Now, why was that not obvious to me in the first place?

← Why Not Jumping Joes or Jumping Steves?