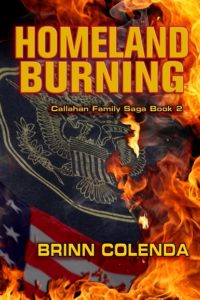 If you follow me closely, you may recognize the names Brinn Colenda and Tom Callahan. One man is real, the other is his creation. Mr. Colenda is the author of two other books in the Callahan family saga, Cochabamba Conspiracy and Chita Quest. He has just released the third book in this eventual sextet, Homeland Burning. And it is at least as captivating as the other two.

It is slightly confusingly at first because this book is chronologically the second in the series. The action follows Cochabamba Conspiracy and precedes Chita Quest. But once you get that, it’s easy to follow.

Unlike his other two books, this one takes place entirely on American soil. It’s our worst nightmare as a nation—terrorists relentlessly and seemingly randomly staging attacks right here at home. These attacks are carefully orchestrated for maximum damage.

At the end of Cochabamba Conspiracy, Tom Callahan, a colonel in the US Air Force, may or may not have killed Kurt Wallerein, No. 1 terrorist on your international hit parade, at the end of the first book by leading him to fly into the concrete supports of a bridge, his plane exploding into flames. Our terrorist is one tough cookie, though, and manages to survive, not surprisingly vowing revenge on the entire Callahan family.

There are two things that to me are marks of a really good writer. One is, there is a lot of highly technical information in the book and Mr. Colenda tells us what we need to know in a way that makes is pretty easy for us to follow. Next he has two characters do complete turn-arounds, but he makes them work. One character seriously disapproves of his daughter’s marriage to an American. Another is one of our villain’s most trusted henchmen, who starts out just as eager to wipe out America as Wallerein himself is.

And as I said, as unlikely as each one may seem, they make sense the way Mr. Colenda describes them.

One thing that seems to stretch credulity a bit are, as in the first book, such astounding feats of airmanship that you’re tempted to role your eyes and go, “Oh, puh-leeeease!” Thing is, I happen to know for a fact that these things have happened within the US Air Force. The settings were different, but the feats of flying expertise were the same. Besides, fiction depicts the extraordinary, not the commonplace. I mean, that would just be boring.

And “Homeland Burning” is anything but boring! It’s full of action, love, romance, humor – all the things we want in a good book. Or a good movie…?