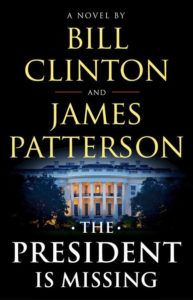 I have this wonderful picture in my mind: Clinton goes to Patterson and says, “Jim!  Jim, we gotta write this, ya gotta help me with it!  Nothing classified, a course, cain’t do that.  But just something to let people know there’s stuff they don’t know!”

This book is pure fiction (if it weren’t, Mr. Clinton would be under all kinds of arrest), but what I think is true – and what is important – is that there are very often things that no one can be told, as a matter of national security.  I’m sure there are things that even Congress doesn’t know, that maybe even the president’s inner circle doesn’t know.  And the public certainly doesn’t.

That’s what happens in this story.  America is facing a computer hack like nothing the world has ever seen.  A virus, code named Dark Ages, has been implanted into our servers that will affect EVERY server, EVERYWHERE in the country.  EVERY device will be affected by this virus.  ALL electronic devices and files in the entire country – not just the government – will be erased.  Not deleted; you can get deleted back.  Erased.  And we don’t know when this will happen.

The virus is the product of two whiz kids – Nina and Auggie – on behalf of Suliman Cindoruk, the Osama Bin Laden of the story, head of the Sons of Jihad.  When they fully realized what they had done, they set out to warn us and help us stop it.  Sulliman has figured out the kids have betrayed him and tries to kill them.  He is successful with Nina.  Auggie survives, but he really doesn’t know how to stop the virus, only Nina did.  Just for good measure, someone in President Duncan’s innermost circle of six has turned traitor.

And through it all, Congress wants very much to know why President Duncan kept US forces from killing Sulliman.  He was in our sights, literally, so why, Mr. President, did you stop our forces from killing him?  And why did you place a phone call to him?  Reasonable questions. And he’d love to tell them, to explain himself.  But he can’t.  National security.

This is James Patterson.  You know it’s going to be a good story, well written, and easy to read, not the least because of the really short chapters.  What sets this one apart for me – besides the idealistic, rather boring speech at the end of the book – is that it feels very real, it could happen.  We are that vulnerable to a cyber attack.  And I really do feel like Mr. Clinton is giving us a peek inside the White House.