"The Scarlet Pimpernel" by Baroness Orczy 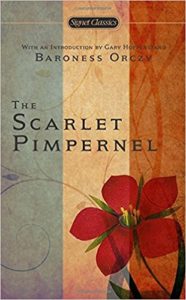 This is one of those books we’ve all heard of, but haven’t read. For the record, Baroness Orczy – and yes, she really was a baroness – wrote the book because of the success of the story as a stage play. It’s an exciting and iconic story, very well told. It is set in 1792 during the French Revolution. The peasants had overthrown and killed the monarchy and is now in the process of killing as many of the elite class as they can, regardless of whether they had anything to do with the oppression that was at the heart of the revolution in the first place. Anyone who objected to that was also guillotine fodder.

The Scarlett Pimpernel is the name of the man, as well as his group of nineteen dedicated followers, who rescue as many aristocrats from certain death as they can. Their cunning and daring strategies – not to mention, excellent disguises – help them to boldly spirit them out of France right out from under the noses of their enemies, Citizen (the only title anyone can safely use) Chauvelin and his band of soldiers. Understandably, the Scarlet Pimpernel is #1 with a Star on Chauvelin’s hit list. He will go to any lengths to capture him. Which, as any loyal suspense reader knows, leads to his eventual undoing.

The name Scarlet Pimpernel is taken from a small red flower. At the scene of every escape, a Pimpernel leaves their calling card, which carries a red outline of the flower. Why that particular flower was chosen is not said. My vote is that calling a hero “the Scarlet Pimpernel” was just too silly for the baroness to resist.

I don’t think it’s a spoiler to tell you the Pimpernel himself is Sir Percy Blakeney, the toast of British society. An amiable, unusually tall, handsome, wealthy, witty, well-dressed fop, he seems to have nothing else going for him. Except for his even more stunning wife, Marguerite Blakeney, née St Just, a charming and witty actress who was the toast of French society. Until she married Percy and moved with him to England. The couple married out of passion, but that passion went underground when Sir Percy learns she accidentally betrayed a friend of his. Marguerite is not only hurt, but finds she can’t respect her simple-minded husband, whose life seems to consist of parties.

The Scarlet Pimpernel is a landmark in the annuls of fantasy and sci-fi. He is the first of the superheroes with a secret identity, an alter-ego so bland you’d never suspect he was a hero. The baroness set the mold for Superman and Batman and the whole legion of Marvel caped wonders that followed. And I’m perfectly wiling to believe in them. Even though it is so unbelievable that you wonder why those close to him are so blind to the whole host of similarities between Clark Kent and Superman. But okay, I’ll buy it. Because it’s fun.

In the Scarlet Pimpernel’s case, it’s not nearly as obvious because nobody actually knows what he looks like. But still, how anyone could miss how intelligent and capable he really was is beyond me. But as I say, I’ll go with it, because it’s a good story.

Sir Percy was the most charming character. How can you not like him? The tall, handsome, rich guy who continuously risks his life to save those who mean nothing to him personally, just on principle? Ya gotta love him. But it’s his wife who has the most interesting story.
Marguerite Blakeney struggles with where her loyalties are/should be. Her brother or her husband (who also happens to be saving lots of people from your homeland)? Her homeland or to her adopted country that has been so gracious to her? She deals with this through the entire novel and it is heartrending to watch.

As I said, the book is very well-written. One way you know this is that Chauvelin, the villain of the piece, for all his flaws, is clearly very sharp. Baroness Orczy makes you admire him even if you don’t like him.
And though the language is a bit archaic, it’s very readable. You never get lost in the verbiage. And if you like this book, you’ll want to know that it’s actually the first of a 12-book series.