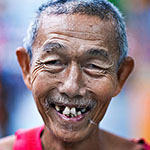 I had an interaction with a sweet, kind, caring 18-year-old girl today.  She sees no reason to live.  She’s not angry, she doesn’t hate life, she just sees no reason for it.  I told her the purpose is what you make it, find your passion, etc.  She said, she could see that, but she doesn’t like dealing with feelings.  It’s just pain. I said no, it’s not just pain, there’s the good stuff, too, it’s a trade off that most people think is worth it, … She said all she had felt were the bad ones, none of the good.

All her responses to me were calm, clear, well-reasoned.  She seems almost in a Zen-like state.  You know, the calm of someone who has made a decision and is comfortable with it.  Which makes it all the worse, the way I see it.  She seems such a magnificent person!

What happens that a child grows up like this?  How does a child never experience the good?  But I have interacted with enough young people with absolute horror stories to believe her.  Or at least, not enough of it to put any value on it when compared to the bad.

I’m not blaming anyone, I’m not saying people around her should have seen that something was wrong, and blah, blah, blah.  I’m just saying, smile at a stranger today for no reason.  I mean a sincere smile.  Give them something to feel good about.  And I’m far from the first one to suggest this.  But maybe if enough of us suggest it enough times, we’ll catch the ones who are falling through the cracks now.

← Just Say You're Sorry Who I'd Most Like To Talk To →