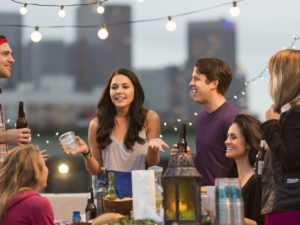 Ever noticed that when you see people out of the context you usually see them in, they’re suddenly a whole different person? You don’t think of them outside of that one environment, so it’s actually a little surprising that they exist in other environments. I mean, you know they do. But it’s kind of like why it was so shocking when you were a little kid to saw a teacher outside of school. The fact that teachers exist outside of school does not register with elementary school kids.

And sometimes, in the usual context, you call the person by their title and last name, but in this new context, everybody calls each other by their first names. What do you do? When I was a substitute teacher, I had a girl in my class once whom I knew from a theater group. That one was pretty easy because she’s still the child and I’m still the adult, so I was Miss Susan at the theater and Ms. Scher at school. But it’s not usually that simple. Like a doctor I used to have. He’s my age. Had we met anywhere but in the emergency room (long story), I’d have called him by his first name. So, why did I have to call him Dr. now?

And there’s another thing. You’ve been taking to someone you’ve never met, but when you finally get around to exchanging names, you have to then stop and say hi and shake hands. You’ve been having a perfectly fine conversation for maybe as much as 15-20 minutes, but you still have to stop when you trade names. I’ve never understood that. Why not just say, “Ok, thanks,” and keep talking?

But that’s just me.

← Spring at Last! I Don't Know When to Shower →