Why Not Jumping Joes or Jumping Steves? 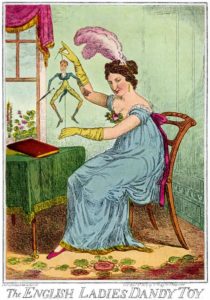 We’ve all done them. In elementary school, if  nowhere else. The Jumping Jack. It’s pretty easy to see why it’s called a jumping something, but why Jack? There are several stories that claim to explain this. One is quite simply that it looks like the jacks you played with as a kid.

Or it was an exercise designed by Gen. Jack Pershing, while still a cadet, when he was ordered to haze a fellow cadet. Pershing reportedly wanted to make it beneficial as well as hazing. (On a similar note, did you know the treadmill was originally designed as a torture device?)

Or it was named for the old wooden toy the lady in this picture is playing with. You’ve seen these, at least in pictures. Pull the string and he’d spring into action, like a marionette. (Jay Leno has been quoted as saying he’d jump, too, if you pulled on him there.)

Or they were just named after fitness guru, Jack LaLanne. By the way, did you know his wife was named Elaine? That’s love. There’s no other reason to tolerate a name like Elaine LaLanne.