"Wonder" is the Real Thing 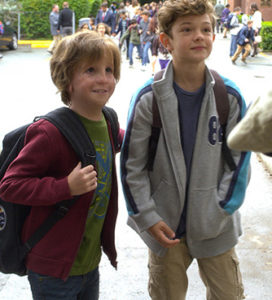 Remember when everyone in the audience cheered when Han Solo suddenly showed up to help Luke and the rebels destroy the Death Star? Or how, after watching Tom Hanks and Geena Davis play baseball for more than an hour, everyone sat through all the credits, just watching the retired women play ball? Wonder is one of those movies. You are totally engaged, you cry through much of it, and everyone applauds at the end.

Augie Pullman, because of the rare Treacher Collins Syndrome, has a face deformed enough that it actually scares very little children. For that reason, he has been home schooled. But now he’s 10 and it’s time to take on the real world.

Of course, he gets stared at and bullied a lot. Three fellow students have been assigned to meet him before school starts so that he at least knows someone when school opens. One boy turns out to be a bully, the girl appears not to even notice Augie’s deformities because she appears not to notice anything outside herself, and the third, Jackie, becomes an actual friend, not just an assigned one. He and Augie are “besties.”

Mr. Browne, one of Augie’s teachers and a model we’d all like every teacher to fit, starts the year off with the precept: “When given the choice between being right or being kind, choose kind,” a Wayne Dyer quote. That is a major theme of the movie: Choose kindness.

Sadly but not surprisingly, in order to fit in with the boys who are bullying Augie, Jack lies and tells them he doesn’t really like Augie, he just feels sorry for him, not realizing that Augie hears him.

You know how kids are, you know that moment is coming. But it is no less heart-rending when it does. Watching Augie try to comes to terms with it is one of the most epic battle scenes I know of in a movie.

Of course, everything ends up happily ever after. Augie perseveres and the kids learn that he’s just another kid, and a pretty cool one at that. He’s even rescued from bullies by kids who used to bully him. You know that’s going to happen. But it’s not about the destination, it’s the journey.

Part of what makes this journey so outstanding is the performances. They are all outstanding, but some of them, like Julia Roberts and Owen Wilson as the parents, you expect that of. Jake Tremblay is not as well known, though he will be soon. He is amazing as Auggie. He burst onto the scene two years ago in Room and was just as good in that movie. There are a lot of excellent child actors, but there aren’t that many who can stand out amongst adult, very experienced actors. Dakota Fanning, Ricky Schroeder, and Freddie Highmore were all in that category (I say were because they’re adults now). And now we have Jake Tremblay. As with Room, without Jake, there would be no Wonder.

Izabela Vidovic as Augie’s older sister Via (short of Olivia) doesn’t just choke you up a little, she brings you to full on sobs. Daveed Diggs‘ Mr. Browne, one of Augie’s teachers, is wonderful, and not just because Mr. Browne is such a fantastic character.

The other performance that really stood out for me, though, was Mandy Patinkin as Mr. Tushman, the headmaster (and go ahead and joke, he’s heard ’em all). I love the scene when he’s got the lead bully and his parents in his office. The parents are the kind you expect a bully to come from, blaming it on the other kid. The father threatens him, saying he knows people on the school board. Patinkin’s headmaster just laughs to himself and calmly says, “I know more.”

And kudos must be given to the scriptwriters. Things that could be hokey are instead incredible moving.

See this movie before the hype starts so you can appreciate it for what it really is. And you might want to go to a later night performance. Unless you don’t mind little kids talking all through it.