Not With a Bang, But a Crash 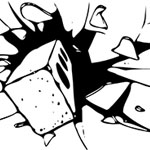 hat’s how my weekend started. Literally. I was at my desk when I heard two very loud thumps outside my kitchen, followed by a resounding crash. The first thing I did was scream. It scared the heck out of me!

I do not live in that kind of neighborhood. This is a very safe place. I once left my car open – not unlocked, open – overnight and nothing was gone in the morning. Not that I ever tried that again, mind you, but I’m just making a point. Loud crashing noises do not happen here.

I ran into the kitchen to see what had happened. The first thing I noticed was a whole lot of glass in the sink, and it wasn’t from anything I had in the drainboard. Then I looked up and saw the hole in the window. I started walking through the kitchen, looking for what had caused it, and eventually noticed the floor was covered with glass. And I was barefoot. I don’t know why I didn’t get cut. But I get out of there and put my slippers on.

It’s so strange how the human mind works. I had been walking on the glass-strewn floor without any injuries, but now that I knew the glass was there, I was paralyzed for a second because I was afraid of getting cut.

911! How hard is that! We all know that number. Three-year-olds know that number. They chose 911 precisely because it is so easy to remember and to dial. But it was a good 10 seconds before I managed it. Ten seconds may not sound like much, but think about it. I have no idea what was going on my head. Not much, apparently.

First, let me say it is astonishing how far and how high glass will fly when propelled by a heavy object traveling at a high rate of speed. It was all over my counter, my kitchen table, some even got into my top-loading washing machine 15 feet away, it was all down my entryway hall, and a surprising amount made it all the way to the carpet by my desk.

After I called 911, I found the half-a-brick-sized piece of cinder block that had done the damage. I didn’t touch it. I’ve watched enough TV to know there could be evidence on it. I couldn’t imagine getting fingerprints off of cinder block, but I’ve never seen that on TV, so I didn’t know.

When the cops got there, they assured me the attack was not personal – not everyone likes me, but I just didn’t think I’m important enough to be hated that much – that there was a bunch of punk kids out that night, causing trouble. Not from the neighborhood. In fact, they probably came here because if they were seen, nobody would know who they were.

Having been assured once again by the police that this was not personal, I was safe – and they did thank me for not touching take the cinder block as they took it with them – I was able to calm myself enough to go to sleep. My neighbor wanted me to stay with her, but have I told you how comfortable my bed is? Tempurpedic. Top of the line. So, I just drank some chamomile tea. That was the end of the incident. I’m fine and nothing else happened. It later occurred to me that I usually do the dishes around that time. That is, I’m usually standing right in front of the window. Whew!

But you know what I discovered about myself? I am not brave. I did not pick up a baseball bat and go outside, looking for who had done this. Even if I had had a baseball bat, I wouldn’t have gone out. No way. Again, I watch television. I know better. That’s when the guy gets her with an ax.