Anybody Else Tired of Precocious Kids? 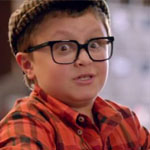 Is anybody else tired of those precocious children in television commercials?  First we were inundated with them in TV shows.  It seemed like there were no normal kids anymore, they were all going on 40.  It’s cute once, but after a while, you just want to see some little brat eating dirt or something.  That’s settled down some now.

But now there’s the commercials.  The first one I’m aware of was Amazon Prime, with those two kids and their new cell phones.  “I’ve been on this earth nine years, I’ve never seen anything like it.” And the kid nails it!  That was funny.  It was still kind of cute the second time.  Amazon has the wisdom not to keep pushing it.

Everybody else does, though!  Everybody’s got kids functioning as adults now.  And most of the time, it doesn’t even make any sense!  Tell me what the point is of having a 10-year-old in a shirt and tie dashing his phone to the ground in frustration?  The Amazon kids weren’t acting as for adults.  The whole point was they were not adults, they’re kids.  But the little girl looking at her smashed up car turns into an adult?  Why?  How does that make sense?

I don’t remember who else is doing it.  Maybe it’s just that I see those commercials so often, it seems like there’s a lot of them.

← The Elusive Peach Coulrophobia? What's So Sacred About Greek? →