Coulrophobia? What’s So Sacred About Greek? 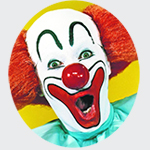 Coulrophobia has only been in the lexicon for about 20 years. It means an irrational fear of clowns. Apparently, that fear has been around for a while, but nobody told the Ringling Brothers or P.T. Barnum. So there’s no need to be embarrassed if you have find yourself shrinking from those big floppy shoes, ridiculously made-up faces, and bright red noses. So, maybe the fear is not so irrational after all, especially in the face of the Joker, John Wayne Gacy, and certain Stephen King movies.

Anyway, where does the term coulrophobia come from?  There are several different ideas on that.  Most dictionaries don’t even have it yet, and I’m pretty sure no printed dictionary does.  The most popular theory seems to be that it comes from the Greek word (surprise surprise) kolon, which means supposedly means clown, but it turns out that’s just the Greekification of the English word clown.

Some say it comes from the Greek word for limb – kolobatheron – as in one who goes on stilts, or stilt walker.  Since the Greek language does not have a word for clown, that was as close as anyone could come. Okay, A) that’s really a stretch and B) I looked up both limb and stilt in several English-Greek dictionaries and not one came up with any corresponding Greek word, nor did kolobatheron appear in any Greek-English dictionary.

So, here’s my question: Why does it have to have a Greek etymology?  This is not an ancient Greek concept, even if there is some dictionary somewhere that has one of these words in Greek.  And if it needs to have a classical origin to be acceptable to us, why no go to Latin?  We could use fossor, which is Latin  for – you guessed it – clown.  We could call it fossorphobia.  That makes as much sense as coulrophobia, which nobody can seem to find the etymology for, and it’s easier to spell.

But seriously, what is so sacred about Greek?  Why not call it Barnumaphobia?  Why do medical terms have to be undecipherable?

← Anybody Else Tired of Precocious Kids? Religious Experiences on Mushrooms? →