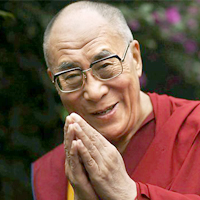 I want to talk with the Dalai Lama.  I heard about a reporter – or something like that – asked him once what he would do if science could absolutely, positively, beyond any kind of doubt say that reincarnation does not exist.

My response would probably have been along the lines of, “There’s no way you could prove that.”  But that’s not what the exercise was.  The Dalai Lama immersed himself in the exercise.  He didn’t worry about the feasibility of it, that wasn’t the point.  He just fully entered the reality he had been given.  He said, “I would say we would have to rethink our beliefs.”

OMG!  Is that amazing!  The ability to change realities at will like that.  And the willingness to let go of a deeply held, life-long belief at the snap of a finger, should it prove impossible.  I am just in awe of that.  I don’t know what I would want to talk with him about (I’d mostly listen, I hope), but I think just being in his presence would be an incredibly fulfilling event.

And hey, the Dalai Lama’s the one who said, “Know the rules well, so you can break them effectively.”  (Notice he said effectively, not properly, as so many misquote him.)  And have you ever seen a picture of him not smiling?  I want to know what he knows.

← Smile at Someone How Do Parents Stay Sane? →