Only Make Tiramisu for a Party 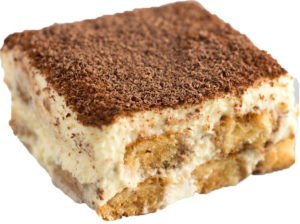 Or if you have a big family. I’ll get to that later.

I read something about tiramisu in the paper recently, so I got a bug up my butt about it. I used to work in a Little Italy district, so I know tiramisu. For those of you who don’t, it’s a very creamy, very rich dessert. And it is very important to the Italian culture. Restaurants will compete to have the best tiramisu, just as bars will compete to have the best margarita or bloody Mary.

Tiramisu is a specialty food. I know many Italian chefs, but I don’t know any who would attempt to make the dessert themselves for their customers. Not even most regular bakers are entrusted with the task. The manager will bring in a tiramisu baker. He’ll come in every night, after the restaurant is closed, to make it for the next day. See, you don’t want fresh tiramisu. It’s like stew in that it’s not at it’s best the first day. You want to give the liquids a chance to mingle and to pervade the lady fingers.

I haven’t had tiramisu since I found out I was gluten-intolerant and couldn’t eat the ladyfingers that are an integral component. But I recalled seeing some gluten-free ladyfingers, so I decided to try it. And by the second day, it was as good honestly as any I remember. Here’s the recipe, if you want it.

Warning: Consume tiramisu in very limited quantities only. Do not go back for seconds.

At the risk of ruining it for you, the little 9×9 baking dish-ful that I made contained 6 egg yolks, 12 ounces marscapone cheese, and nearly 2 cups of heavy whipping cream. OMG. And yes, it is supposed to sit about  24 hours, but it won’t even last a week because the lady fingers get too mushy. Which is why…

If you’re going to make this wonderful dessert, only do so when there will be a lot of people eating it.