"Sacred Journey of the Peaceful Warrior" by Dan Millman 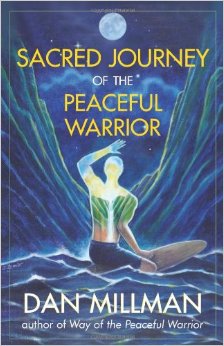 In his college days in UC Berekely, Dan Millman met a sage in the guise of a service station mechanic. Socrates, as he dubbed him – for the man would never tell him his name – led Dan on an incredible voyage of self-discovery. If you have any interest in that sort of thing, Mr. Millman’s book about the experience, The Way of the Peaceful Warrior, is a must-read I reviewed it here about six weeks ago.

Sacred Journey of the Peaceful Warrior is part of that story, but it’s not a sequel. In the first book, Socrates sends Dan out into the world for several years before he teaches him anything more. Sacred Journey is about that “hiatus” in his life. It starts with him going to Hawaii to search for a woman whom he has no idea how to find. Socrates has told him of her existence – and told her about his – but does not give him a name, address, phone number, place of employment, or any other obvious means of contact. The idea being, “when the student is ready, the teacher will appear.”

And appear she does, in the form of a very “rounded,” as Mr. Millman words it, older woman, named either Ruth Johnson or Mama Chia, depending on where she is at the moment. The saga begins with him almost dying of exposure and dehydration due to misreading the note she has given him.

It is as impossible to describe his journey on Hawaii as it was to describe the ones at UC Berkeley. Everyone who does any kind of self-awareness, personal growth stuff knows about the higher self and that the journey is to connect with that higher self. Many have done that. Once or twice. And it’s life-altering enough in those moments, but what Dan seeks – to a degree – is a lasting connection. Then he discovers what is beyond that, which is a reality even most of those who are on the journey aren’t aware of.

Now, an amazing thing happens when you achieve that level, either once or continuously. You see all this suffering going on in the world and want desperately to end it. But of course, you can’t, so the first response tends to be sadness, hopelessness, sorrow, that sort of thing. Then you take the next step: You accept that you can’t fix it.

“I wanted so much to help, to make things better for every suffering soul, but I knew that from where I stood I could only love, understand, trust in the wisdom of the universe, do what I could, then let go.”

That’s a painful discovery to make, that you can’t stop the suffering you can so clearly hear, see, and even feel. But that’s how it is. A few change the world.  There’s Gandhi, Mother Teresa, people like that. But for most of us, we can only do what we can do. We can only change one little piece. And that piece is usually ourselves.
There’s a story in the book about Dan and Mama Chia stumbling onto hundreds of starfish who have beached themselves. It’s a phenomenon seen in the marine world occasionally and no one seems to be sure why. So, Mama Chia picks up one of them and puts it back in the water. Dan asks why she bothers. There are so many of them, they can’t possible save all of them, so why does it matter if they save just a few? Mama Chia picks up another one and replies, “It matters to this one.”

← "The Postcard Killers," by James Patterson & Liza Marklund "Switched On" by John Robison →