"Switched On" by John Robison 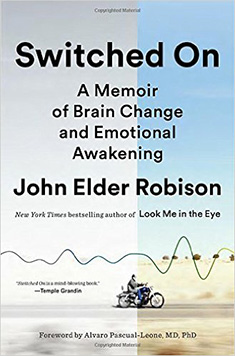 The subtitle of this book is: A Memoir of Brain Change and Emotional Awakening. Author
John Robison has a very mild form of autism known as Asperger Syndrome. Like all Aspies, Mr. Robison has all the emotions everyone else has, but didn’t express them the way other people do. It’s like they were dialed way down, so he seemed uncaring and removed.

Mr. Robison is one of the lucky Aspies. His was actually very useful in his chosen career. He created instruments and sound systems for bands, big-time bands. He could relate to an amp or guitar the way most people relate to other people. He knew exactly what was going on with every piece of equipment, so he could easily identify and fix whatever problem there might be. And, conveniently, he didn’t have to deal with people very much.

He says of himself that he would “often miss the unspoken cues—body language, tone of voice, subtleties of expression…” He knew he still didn’t really fit in socially, so, when he was approached about an experimental technology that might have an affect on his Asperger’s Syndrome, he jumped right in.
The technology is called transcranial magnetic stimulation, or TMS. Real briefly, specific areas of the brain are stimulated magnetically, the intent being to rewire the brain a little bit. It’s completely non-invasive and, though it’s still experimental, it’s been shown to be effective for some types of depression. Using it for autism is totally experimental.

Mr. Robison’s response to the treatments is amazing. Everything’s turned up. He can feel everything around him, in some cases, memories from years ago. He cares more about people because he understands better now who they are. Music has been his life, but as an engineer. This time, when he turned on his music for the drive home, the world changed.  “The transition was instantaneous. One moment I was navigating traffic in my Range Rover and the next I was watching five singers in a nightclub.” The music had taken him back to a concert he had worked for this band, but it was all different this time.

“My visions was crystal clear, my head was full of sound, and I felt totally alive. …The feeling was so magnificently overwhelming that I began to cry.”

That change wasn’t permanent, but it didn’t go away completely, and some changes have lasted. And not all of them were comfortable for him. To say it rocked his world would be an understatement. Mr. Robison explains things very clearly in this book, so even if you know nothing about any of this stuff, you’ll still be able to follow what he’s talking about.

When reading this book, you’re likely to find yourself either a little disbelieving or very relieved. I kept saying, “Yes! Yes, that’s exactly it!” You’ll have your boundaries expanded whichever one you experience, but it might be of more value to those who relate to it, the way I did. Most Aspies, when it’s very mild, don’t know they have it.  Having a label for it doesn’t change it, but it can be very reassuring to know it isn’t just you. Also, you can do some research and learn ways to deal with it. Even if you don’t relate to this book, you may know someone who does.