"Take Me With You" by Catherine Ryan Hyde 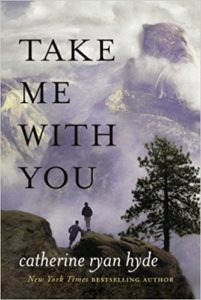 August Schroeder is just starting out in his RV for his annual summer trip to various national parks, aiming for Yellowstone this year. He had planned to take this trip with his 19-year-old son, but Phillip was killed in a car crash. So, he’s taking him along in the form of some of his ashes.
Long story short, the RV breaks down early on and he ends up taking Wes the mechanic’s boys – Seth, 12 and Henry, 7 – on his trip with him. Hence the title, Take Me With You.

Catherine Ryan Hyde – whom you may be familiar with from another one of her books, Pay It Forward – creates wonderful, believable characters. You can imagine running into these people on the street. Predictably, August and the boys grow very close and Ms. Hyde has that relationship develop in a very natural way.

The character I found the most interesting was the one we see the least of – Wes, aka Dad. Turns out, he’s an alcoholic. He is in jail for his fourth DUI. When we meet him, he’s your average great guy, great dad, very likable. Just a good guy who made a bad choice and got himself into an untenable situation. He is very supportive of his kids, especially Seth, even if he might not be comfortable with what he is doing and the risks he’s taking. He truly believes in his boys.

And this is what we so often forget about alcoholics. What Catherine Ryan Hyde reminds us is that alcoholics are just people, too. We all have our less-than-attractive sides. Yeah, alcoholics’ bad sides may be much worse than others’. But it’s just so easy to vilify them for the damage they’re doing, especially to any kids involved, we can forget the good that is there. That’s the tragedy, isn’t it? The good guy disappears into the bottle. I really like the way Ms. Hyde drew this character. It’s important for us to remember that.