One-Hit Wonders: What’s Up With That? 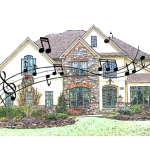 What’s the story there? The artists behind things like Lollipop, lollipop, oh, lolli, lolli, lolli and Mu-huther-in-law (mother-in-law!) and It was a one-eyed, one-horned, flyin’ purple people eater*. Why do we never hear from those people again? It’s an eternal mystery, isn’t it? No, I don’t think so. I have a pretty good idea what’s going on (Not counting the ones who die prematurely or just don’t try again).

A group of us used to sing at restaurants sometimes, a very informal sort of thing. Phantom of the Opera was the biggest thing around in music circles at the time, so it wasn’t unusual to hear “Music of the Night” and other songs from the show. The title song is a duet and one night, a guy asked me to sing it with him. The woman’s part in that song ends with a series of long high notes, climaxing with an E over high C, which not even all professional sopranos can manage. I do not know what possessed me, but I just went for it that night. I nailed it! It was beautiful! It was 11pm, but I called my voice teacher and he did not mind being woken up for that.

Wanna know when the next time was I was able to hit that note, much less hit it well? I don’t remember. It was at least several months. Very frustrating. I knew I could do it. I had done it. But it was months of work before I could do it every time. Shortly after than, I nailed a pianissimo high B (which is actually harder) and the same thing happened. I’m like, What the…?Then I figured it out.

The first time I tried for those notes, they were exactly right, they were great.  I think my body – and feel free to substitute nature, the universe, God, higher power, whatever here – was telling me, “See? You can do this. You have it in you. Now, if you want to do it consistently, you’re gonna have to work for it.” It was like getting a virtual image of the house you want to build, having all the drawings done and everything. You’ve seen the house, you know it’s there. But if you want to live there, you still have to build it. I think it’s just that so often, we think we’re seeing the house when all we’re really seeing is the drawings.