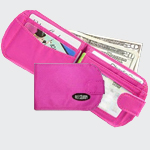 I got a call from my car insurance company yesterday. A guy had called them saying he had found my wallet and was holding it for me. My license, bank card, and everything else was still there. By that time, I had gotten a new license, bank card, and wallet, so it didn’t make a whole lot of difference, but still. He couldn’t find my number anywhere in the wallet – and let’s all take a lesson from that, shall we? – but my insurance card had the number of the company on it, so he called and gave them my policy number and they called me. That man went over and above.

Yeah, people! Don’t you love stories like that? Don’t they restore your faith in the world? Even if just a little. There was a gift card to Chipotle in it and I tried to give it to him, but he wouldn’t take it. He didn’t think he had done anything more than was right to do.

Now, here’s the backstory: About nine months earlier, I had left the wallet on top of the pump when I got gas. I called the station as soon as I noticed it was missing, but it was already gone. Big surprise. The guy took my name and number in case it showed up.

Then yesterday, when I went to pick it up, the guy told me he had only been at that station for a couple of months and he saw another wallet and a driver’s license just sitting in a corner behind the counter, so he started trying to notify the people.

Now, logically, the wallet had to have been recovered within a day or two of when it was taken (I can’t bring myself to say “stolen” since it’s bright pink and I left it lying there.). They would have taken the cash and then dropped it and someone found it and turned it in to the station. But no one ever called me!

If there were tons of wallets and licenses and no phone numbers attached to any of them, I can understand just holding them there in case the owner ever called looking for it. But I did call looking for it! And apparently, no one could make the connection between that call – giving my name, number, and description of the wallet – and the one that showed up a day or two later.  Yeah, it’s not their responsibility, but really. Someone should have called me.

But they didn’t, so let’s think again about the guy who got it back to me. Yea, people!