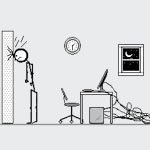 I filed some forms with the government last month.  Twice I asked exactly what I had to send in with it.  After compiling the documents, I called again, told the woman what I was sending, and asked if I had everything.  She said yes, I did, go ahead and send it in.  So I did.

Several weeks later, I got a letter saying my application had been rejected because something was missing.  I called and asked how that was possible.  Well, the item left out was one no one had told me to send.  When they looked at my application, they realized they needed another document that no one knew would be needed until they rejected my application. … Did you follow that?

So, they told me to just email those missing documents in, so I did.  I even checked to make sure the correct person had received them.  She had.

Two weeks later, still no word and deadlines are approaching. I call and some guy tells me there is no active file for me at all.  I panic and I ask how that’s possible since… and I recounted the story to him.  He said he didn’t know, he just knew there was no file.  He finally gave me another number to call.  The woman at that number knew who I was and what file I was referring to, but it had been closed once it had been rejected.  Huh?  But I had been told…  Well, I had to refile.  Why had I been told, then, to just send in the missing forms?  Her response: I had to file again.

I pursued this line of questioning, further than was wise, I know, but I was frustrated.  I finally gave up and started compiling the documents again.  Then it hit me why I had kept asking that woman the same questions.  I didn’t want a different answer.  There wasn’t a different answer, I knew that, I knew I had to start all over again.  All I wanted was for her to say, “I’m sorry.  That shouldn’t have happened.”

That’s all I wanted.  Of course, she gave me the standard “I am sorry for any misinformation you might have been given,” but it was just that: a standard line, there was no sincerity about it.  I had been put in a very difficult situation, by her staff.  They had created the entire problem.  I just wanted her to take responsibility.  Not personally, but on behalf of the department.  I wanted her to say, “I’m sorry,” and mean it.

But they said all I had to do was send in the missing forms.  Well, they told me wrong.  I had to refile, from the start.  With updated information.  So I can’t even just send in the same file I sent before.