Bikers: Over 50, Monied, and Philanthropists 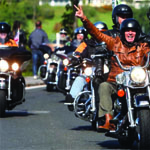 What image pops into your head when you hear “biker”? Hell’s Angels? Something from Sons of Anarchy? Maybe Rebellious/Angry Young Man. Stereotypes in general were not invented by Hollywood, they come from reality. At some point in time, they were accurate. Thing is, most of them never get re-examined to see if they still reflect reality, which they usually do not. That’s definitely true with motorcycle riders.

According to the LA Times, the average California biker is “old, male, married and moneyed.” Other surveys have shown that’s true for most states. Most bikers are over 40 – a huge percentage are over 50. They’ve had their successful careers, now they’re retired or semi retired, and they’re cuttin’ loose, having fun. And they have the money to buy a good motorcycle and the expensive protective gear that goes with it. (Yes, these older riders have learned they’re not indestructible.)  Only about 25% are women, but they are currently the fastest-growing demographic, so look for that to change soon. Some of them ride with their husband, but a lot ride their own bike.

Here’s another thing that’s true of an overwhelming number of biking clubs: They are humanitarians. How many times have you heard about a motorcycle ride to raise funds for some disease or crisis or whatever?

One of my guests, Drew Alexander, is a volunteer for Wellspring International Outreach, an organization founded and largely comprised of bikers. They support orphaned an otherwise abandoned children across the world. Drew personally has built houses in South Africa, and helped build playgrounds and other support structures. Bikers in general are very active in a new trend called voluntourism, which is exactly what it sounds like: you go on a vacation to be part of exactly this kind of humanitarian work.

This is what bikers do these days.

← Children's Vaccines: Must-Haves or Dangerous Toxins? Why Your Kid Should Play Team Sports →