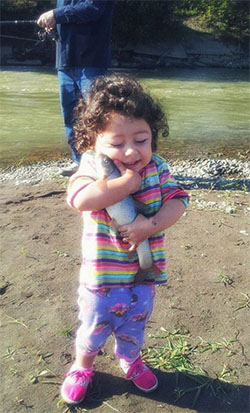 I love this picture! That little girl is so happy! Not many of us would be that delighted to hug a fish to our chest. Fish are slimy and yucky. But she doesn’t know that yet. For whatever reason, she just loves that fish. Or loves the way it feels when it wriggles against her. Who knows? But she’s happy, so who cares?

And I love that the people around her aren’t trying to get her to put it down. They’re not telling her fish are slimy and dirty, they’re just letting her have her fun.

One father I knew said on of the best parts of having a 3-year-old that it gave him an excuse to do silly things without looking foolish. Sure! Let’s put on masks, tie towels around our necks, and run screaming down the hill! Come on, now, doesn’t that sound like fun?

Hugging a fish isn’t inherently good or bad, it’s just hugging a fish. So, why don’t we loosen up the boundaries a little? Silly doesn’t have to end just because you grow up. Think about it. You’re outside, wearing clothes it doesn’t matter if you get dirty, and you’re hugging a fish. If that isn’t a stress-reducer for you, you’re taking life too seriously.

← Appreciate What is Around You The Great Equalizer: The Ladies Room →