The Right Way to Age 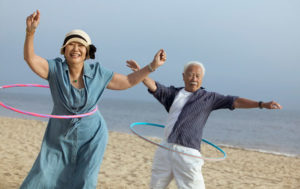 Anyone who doesn’t like getting older isn’t doing it right. Life gets nothing but better with every passing moment. Okay, maybe not “nothing but,” but I stick with my statement. If you don’t find that the maturity, wisdom, calm, experience, and everything else you gain as you mature doesn’t far outweigh anything you might be giving up, then you have a problem that has nothing to do with age. How can you not love being so much more comfortable in your skin than you ever were when you were young? Would you really want to go back to who you were when you were 23? Or even just 10 years ago? I mean, hey, if I could go back to 23 with the wisdom and knowledge I have now, sure, I’d do it in a minute. Not because I want to be a kid again, but because I would be able to appreciate my life in a way I couldn’t when I actually was 23, so I would get so much more out of it! I wouldn’t waste time worrying about things I couldn’t change or that don’t really matter, anyway. I’d be more patient (although I admit that one is still a challenge for me).

Once, when I was somewhere in my mid-30’s, I remember getting really ticked off about something and saying to my 70-ish supervisor, “Boy, I can’t wait ‘til I’m your age, Charlie, because these things won’t freaking bother me!,” except I didn’t say “freaking.” Charlie just laughed gently and said, “You’re right.” I don’t remember what I was upset about – I didn’t even remember just a couple of weeks later. That’s how insignificant it was – but I remember that moment.

And do you really think you were anywhere near as interesting as you are now? I know a playwright who likes to build plays around a female character in her 40s or older. “You all don’t get interesting until you’re that age.”

I got a Masters’ degree a few years ago in Music Theater, when I was decades older than any of my classmates. If there is one thing I got from those two years and $80,000+ of debt, it was – don’t do so much. Don’t work so hard. More than once, I got such effusive praise for work I had done in class that I honestly did not get it. It made no sense to me, because as far as I could tell, I had just been talking to my scene partner. I finally asked a classmate about it. She said, “Susan, you don’t seem to realize how compelling you are when you just stand on stage.”

A considerably younger classmate couldn’t understand how I could do that, just stand there, not do anything. She said, “I’d be afraid to do that.” Right! Exactly! I’m not trying to brag here. What I’m saying is that I couldn’t have just stood there twenty years earlier, either. Even as little as ten years ago, no one would have told me I was compelling when I just stood on stage.

Experience shows on you, but not necessarily in the ways we think it does. When someone over 40 is simply present, their years of life are somehow clearly present, too. We tend to think we have to tell people who we are in order for them to see us clearly. But I don’t think we do. And the older we are, the less we do. I’m not saying I understand how any of this works, but I’m telling you, it’s true. Few of us trust it – at least at my age. I usually don’t – but we are so much more attractive when we do. And life becomes much easier then, too. At least, I think it does. I’ll have to get back to you on that one.

A younger person does not have enough in them yet to be interesting all on their own. I mean no offense at all, please believe that. There is a purpose to each phase of our lives. I think youth is the time to figure out what you are doing on the planet, how it all works, how wonderful life is. It’s a fantastic phase! It’s glorious! It’s a magical time! But it is not the time to simply be. You haven’t earned that yet.

Once on TV, I saw an actor in her early 20’s singing Fever. That song is about sex. It’s a Peggy Lee song. ‘Nuff said? This girl was undulating her body, lowering her eyes, doing the sexy pout thing, the deep voice, the whole nine yards. It made me laugh. She was working so hard at being sexy. But then I realized she had to. She was a girl. A woman doesn’t need all the bells and whistles to be beautiful and sexy, she just is. It’s the same way with men. Folks, do you really think you were better off when you had to work so hard at being who you are?

Part of the problem most of us have with enjoying getting older is, of course, the constant barrage of “young = good” messages from our society. When you are told over and over again that 40 is the beginning of the downhill slide and that the older you get, the worse your life is, it’s pretty easy to start believing it. But I am not on a downhill slide and people telling me I am does not put me there. What it does do is rob them of any enrichment I have to offer their lives. Not to mention the unfair burden it puts on the young. But that’s a whole other article.

You gain confidence from living longer. I don‘t know that most people are even aware of this, but I think it comes from simply having survived. By the time you reach 40, you have been through tragedy. You have nearly died at least once, in some way or another. You have had at least one broken heart you were sure you’d never get over. You have gotten through situations that a 20-something would go into a panic just hearing about. Do you really want to go back to that? Do you really want to give up everything you’ve gain just to pick up a few things you left behind to youth? Is it really worth it?

So, then the question becomes: What did you leave behind? Well, I really do miss being in the shape I was in my triathlon days. I know I could get back to that, but it it is true that it takes more effort now than it did 20 years ago. There are other things, but except for that whole I-can’t-read-that-without-my-glasses bit, that’s really the big one. Well, okay, and the memory gets a bit spotty sometimes, but phones all have digital recorders now so you can make notes to yourself. They’re great.

Anyway, I didn’t ever have to lose that conditioning I had twenty years ago. I let it happen; I didn’t have to, it was a choice. And yes, there are a few more aches and pains, but nothing that stops me. They may slow me down a little, but that’s all. And it could be that way for everybody.

And that’s pretty much my point. I’ve been very active in the health and fitness field for over thirty years and the thing I hear most people say they don’t like about aging is that their body starts falling apart. But that is not your body’s fault. If that’s happening, it’s because you allowed it to happen. I’ve written several articles on this, but basically, you have to age but you don’t have to fall apart. That does not have to happen. At least, nowhere near as quickly as we in this society assume.

You want to get your body back? Start working on it. Maturing should be celebrated, not mourned! Don’t like getting older? Then start doing something about it.